What a good morning! Finally some sun after all that rain. I love to start my day with my coffee and the paper. Let’s look at the headlines in today’s Bethlehem Times. One thing you can say about the Herod administration—they’re always making news.

Sheep Found Shepherdless in Hills Outside City—hah, I know about that one

Unwed Motherhood On the Rise: Some So Poor They Lay Their Babies in Mangers

Oh, my. Maybe reading the paper was a mistake after all. Every day, all the news is bad. I guess it sells more papers. People love scandal. Why don’t they ever print any good news?

You know, for instance, my shepherd friend was telling me the most amazing story yesterday. He was out on the hills with his flocks by night, him and his shepherding buddies—and you know how the internet is always telling you you won’t believe what happened next? It was literally like that.

An angel appeared to them. An actual angel. Do you know how long it’s been since anyone’s seen an angel? Even the Maccabees didn’t get to see any angels. And I might not have believed my friend, but the look on his face—part terror, part wonder, part joy—whatever he saw, he is not making it up.

The angel told them not to be afraid. I mean—how are you supposed to feel when an actual freaking angel appears over your flock of sheep? And then there were hundreds of them, he said—so many he couldn’t count, a multitude—and they said they had good news. Imagine that. Better than this tripe in the paper, I can tell you that. An actual good thing, with nothing bad in it. And again, it was not what you would expect.

The good thing was a baby. Not just any baby—one of these census migrant babies the paper is always on about, and an unwed mother to boot. Her fiancé was there, but they were not properly married. They were in the back of a stranger’s house—you know, where the animals spend the winter—not the best place. And the shepherds, by the way, just left their sheep—walked off their jobs—to go see this baby. Sounds nuts. But my friend said it was just the best thing, despite the smell, and the crowded room, and the family this paper would tell you is immoral, and their regional accent. He said that baby was the best thing he had ever seen.

He told me—it was like his mission, to tell me this story—he told me that when he saw that baby, lying in the feeding trough for the animals, he said he could suddenly imagine a better future for all of us in Judea. A future where he and his shepherding buddies would be treated with the same dignity as the rich folks in Jerusalem. A future where this nontraditional family would have all the opportunities any family would have. A future where we weren’t under the control of any empire. Just a better future, not just for Judea but for the world—where it wasn’t so hard for working people, where people could know the goodness of God, where love had a chance.

Here in this paper it says, “Sheep Found Shepherdless in Hills Outside City.” Sure. That’s the owner of the sheep talking. Let's see, page 2—yep—he’s their primary source. You know Quirinius owns all the local papers anyway. That’s the bad news, from the point of view of the owners and the people in power, trying to keep us scared, trying to make us believe that this little bit of okayness we have in our lives is at risk from those who have less.

But you know, I’m done with bad news, and fake news, and news from the rich and powerful. The story my friend told me, that’s the best news I’ve heard in years. That’s the kind of news I want to follow. It makes me want to be a better person. Today’s a new day. Time to do something good in the world, something deserving of the good news of peace for all people.

Other sermons in the series 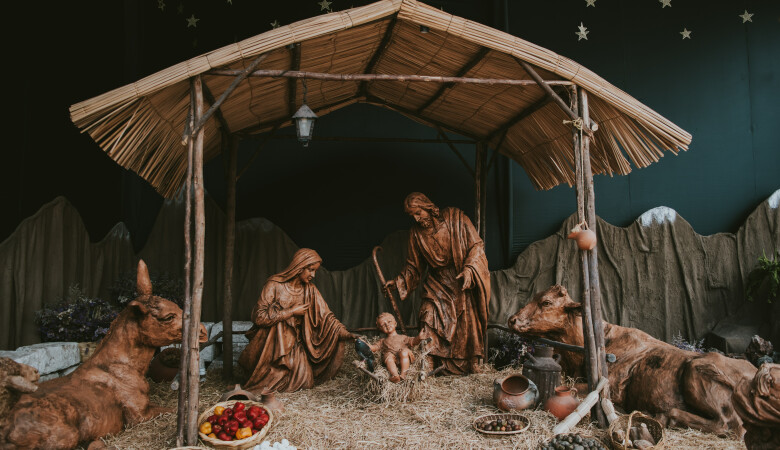 Free From the Chains

The world weighs us down with the chains of struggle and division...